Adarian Malachai (Father of her son)

Cherise Gautier is a character from the Chronicles of Nick book series.

Cherise Gautier more fondly known as Nick’s mom, is a cook and waitress. Cherise usually works the day shifts. Her most prized possession is Nick and she never lets him forget that. There’s nothing in the world she loves more than to see his face and hear his voice. She risked everything to have him and has never once regretted it.

When Cherise was 14 she fell pregnant with Nick after Adarian Malachai forced himself on her. Her parents gave her a choice to either give up the baby or be kicked out. She chose to remain pregnant with Nick and so was kicked out of home. She was taken in by Menyara, who helped her through the pregnancy and Nick was born on Mennie's couch. Having dropped out of High School to raise Nick, she became a stripper.

In Infinity Nick causes her to lose her job at the club and she finds one at Sanctuary as a waitress where she is currently working. 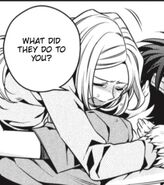