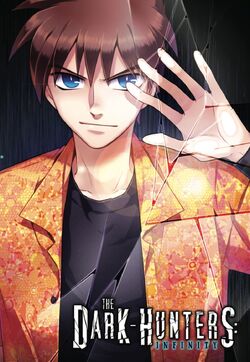 This page is comprised of Nick's relationships with other characters, extending from his old life to his new life. Nick is a sarcastic and caring young man whose antics find him both dangerous enemies and loving friends. 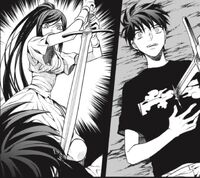 Nick and Kody had an automatic attraction to each other. Partially as Nekoda was originally sent to kill Nick.

The two met when Nick was sent to the principles office ad Nekoda was finishing off learning her schedule. Nekoda stood up for Nick when Stone began insulting him.

The two next met when Nekoda was volenteering in the hospital and helping Nick out. She gave him comics to read as well as allowed him to use her pink DS, which Nick was incredibly grateful for. 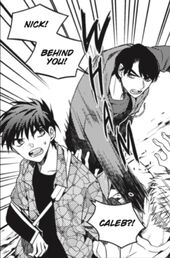 Nick: I haven’t noticed you being slammed into anyone’s locker lately.

Caleb: That’s because you’re not around me all the time. Trust me. Life’s not easy for anyone. Everyone has scars they’re afraid to show and we all get slammed headfirst into a proverbial locker from time to time by someone bigger and badder.

Nick and Caleb originally start out as frienimies or at least on Nick's end. As he doesn't count Caleb as his friend until Caleb proves his worth, unknown to him, Caleb was a demon sent to protect Nick. Caleb didn't like Nick. He didn't like that he was forced to protect Nick but even so he disliked Nick's father even more.

Over the course of the series the two become closer and actual friends as Caleb reveals that he's a demon and Nick learns to trust him. The two still fought playfully and traded insults regularly but even so became somewhat best friends.

Caleb is Nick's bodyguard so he could be protective of Nick at times. Nekoda also noted in Infamous that when Nick was injured in the hospital Caleb seemed generally concerned on his behalf. "You know, we are friends. At least that’s how I think of you. Do you honestly believe I would be able to live with myself if I let someone hurt you after all you’ve done for me? Gee, thanks for the love, Malphas.”

Nick: What is that smell?

Nick: Yeah, well it keeps me from thinking you’re sane.

Retrieved from "https://chronicles-of-nick.fandom.com/wiki/Nick%27s_Relationships?oldid=4456"
Community content is available under CC-BY-SA unless otherwise noted.