Nick was born in New Orleans to Cherise Gautier and Adarian Malachai. His grandparents gave his mother an ultimatum, give up the baby, finish high school and continue living with them, or keep her baby and be kicked out. Cherise chooses Nick and doesn't regret it a bit. Nick was raised by not just his mom but her friends as well. He got into fights on an average basis, always because someone insulted his mother or someone he cares about and never himself. Nick got a perfect score on his entry exam for high school and got accepted into the prestigious St. Richards High School. They even had Nick take the exam twice to make sure he didn't cheat, he got the highest grade to date (100% plus bonus questions correct). Nick had a hard time at school and for a while was part of the football team, until he was kicked off for fighting (even though he didn't start it) by normal bully Stone. One night, Nick was helping his friends with something when he realized they were mugging innocent people. Nick revolted and saved the people, getting beat up and shot by his "friends" in the process. If Kyrian hadn't come along and save him, Nick would be dead. Nick was in Kyrian's debt as he also payed for Nick's hospital bills, (to which Cherise disapproved of, as she didn't like charity) Kyrian decided to have Nick work for him as his Squire. It was just after then that Nick truly discovered his origins and he was the only one able to save the world, but that he would ultimately destroy it. Thankfully Nick is surrounded by friends and people that love him, all of whom would have his back should he call.

The first chapter begins with Nick being lectured by his mother. As he does not want to wear the shirt she got him from a garage sale as he know he'll no doubt be bullied about it.

None the less Cherise forces Nick to wear it, reminding him that it's all they got and they should be grateful. Nick begrudgingly complies. In school. Nick is quickly picked on by the jock, Stone. He easily ignores the insults Stone sends his way but the moment Stone began to insult his mother Nick decked him with his backpack. Soon a crowd gathered and cheered for them to fight. The two boys fought until Ms. Pantall stopped them only sending Nick to the office.

At the office Nick met Kody. He was attracted to her instantly. Until Stone came over and hit on Kody, resulting in her calling him an animal and more much to Nick's amusement. Stone then insults Nick again, leading to Kody standing up for him. Kody soon had to leave as she had to finish overlooking her schedule. Nick is soon suspended from school by the principle Mr. Peters. Nick asks his friend, Brynna Addams to deliver his school work so he doesn't fall behind. When arriving home Cherise grounds Nick, only allowing him to go out to help Ms. Liza move her stocks.

Nick left Liza's at nine o'clock, instead of heading home as he promised. Nick went to his mother's club to apologize. Except this only makes Cherise angrier as he disobeyed her, she sends him home imminently much to his anger as his mom didn't believe in him.

Nick on the way home bumps into his friends Tyree, Alan and Mike. The trio invite him in for a small job and Nick begrudgingly agrees. Nick stood look out, until he realized his "friends" were mugging an old couple. Nick put a stop to it as he couldn't allow it to happen. His friends soon turned on him and began to beat him up setting their gun on him. A mysterious ninja fighting goth named Kyrian shows up and rescues Nick. But not before Nick obtained some serious injuries of which Kyrian pays for. This doesn't make Cherise happy but eventually agrees that he can work for Kyrian to pay it off.

The second chapter begins with Nick being beat up by his "friends". Fearing for his life yet not being able to do anything about it. Not until Nick is saved by Kyrian, Kyrian gets rid of Nick's "friends" and tries to help. Nick. But Nick rejects his help, until he passes out due to his injuries. Kyrian picked Nick up and took him to the hospital. Nick wakes up in the hospital, initially trying to leave as he didn't have the funds to pay for it. But Kyrian reassures him that he himself would be paying. It's not long until Cherise arrives and freaks out, originally blaming Nick until Kyrian defends him. Kyrian and Cherise quickly work out a deal to pay back Nick's debt. Nick will work and run errands for Kyrian for a while until he pays his debt.

Nick is a Malachai. He stands at the height of 6'4, his hair is dark brown and his eyes are blue. His build is lean. He has a scar above his right eyebrow from a fight, a gunshot scar on his left shoulder and another on his hand where he was cut for blood. He wears both St. Nicholas and St. Christopher medallions his mother gave him around his neck. 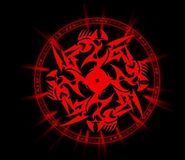 Nick's Grimoire
Add a photo to this gallery
Retrieved from "https://chronicles-of-nick.fandom.com/wiki/Nick_Gautier?oldid=4418"
Community content is available under CC-BY-SA unless otherwise noted.