Zavid Frost is a character from the Chronicles of Nick book series.

About the Character Edit

Demon born and demon bred, Zavid Frost doesn't have much use for humanity. For countless centuries, he's been locked in Helheim to be used in arena fighting. He is semi-grateful for his release, however does have problems with trading one prison for another.

In his Aamon demon form Zavid takes the appearance of a giant black wolf with purple eyes.

As a human Zavid stands at 6'2' with wavy, shoulder length black hair and his eyes remain purple. He has a muscular build and is covered in scars from his time spent in Helheim.

Centuries ago Zavid made a deal to be imprisoned in Zarelda's place, knowing she would not be able to survive their intentions. The entire time he was under the belief she was safe, unfortunately upon escaping after meeting Nick Gautier, he found out Hel had gone back on their deal and his sister was killed long ago. 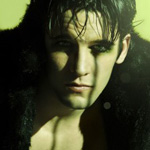 Zavid's human form
Add a photo to this gallery
Retrieved from "https://chronicles-of-nick.fandom.com/wiki/Zavid_Frost?oldid=4440"
Community content is available under CC-BY-SA unless otherwise noted.